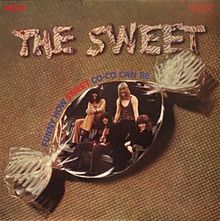 ﻿
It's an indisputable fact that The Sweet always sold more singles than they did albums.  That is not to say their long players weren't up to scratch.  Far from it, since both "Sweet Fanny Adams" (incredibly enough their only L.P. to trouble the U.K. charts, not counting "Best of" compilations) and "Desolation Boulevard" are quintessential mid '70s rock albums - IMHO as good as anything either Purple or Zeppelin ever did.  Nonetheless, the band will always be best remembered for their impressive run of classic pop-glam 45's, a la "Ballroom Blitz", "Blockbuster", "The Six Teens", "Fox on the Run", et al.


Semi-conspicuously absent from the above rundown is the hidden gem that is The Sweet's debut album, "Funny How Sweet Co-Co Can Be", from 1971.  In essence a bubblegum record, it's a curious mix of the band's first hits ("Funny Funny" and "Co Co" - both Nicky Chinn/Mike Chapman originals), covers of '60s pop classics (Lovin' Spoonful's "Daydream", The Supremes' "Reflections"), some more Chinnichap filler ("Chop Chop", "Tom Tom Turnaround" - the latter originally a hit for New World), as well as some early band compositions ("Santa Monica Sunshine", "Spotlight").


About a year ago the Cherry Red Records imprint 7T's issued a double deluxe version of the album, including seventeen bonus tracks.  Among which are early hits "Alexander Graham Bell", "Poppa Joe", "Wig Wam Bam", and "Little Willy", single B-sides, and, on disc 2, the earliest non-charting Sweet singles starting with 1968's "Slow Motion" and concluding with 1970's "Get on the Line" (an Archies cover, no less).  A year later The Sweet's fate was sealed after they were taken on by the Chinnichap songwriting team, a veritable hit machine, and as a result, enjoyed their first taste of chart success with "Funny Funny".  And the rest is, as they are prone to say, history.


﻿
The entire "Funny How Sweet Co-Co Can Be" episode is a true testament to the earliest - and lightest - side of The Sweet; a period the band later often went to great lengths to distance themselves from.  And perhaps understandably so; most of the time session musicians were used on the records and the band wasn't allowed to include too many of their original compositions, and when they were allowed to do so, the material all too often ended up as mere B-side fodder.  Truth be told though, Chinnichap had the magic touch, were indeed supplying the band with chart-making material which, as time went on, did get heavier - and, indeed, better.
Still, "Funny How Sweet Co-Co Can Be" can easily be enjoyed as what it was probably always meant to be: a light, fluffy piece of bubblegum pop - or, quite simply put, a '70s teenpop classic. 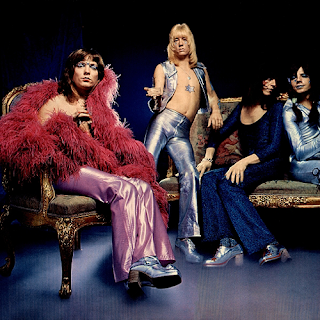