Rock and Roll is Dead...And we don't care! 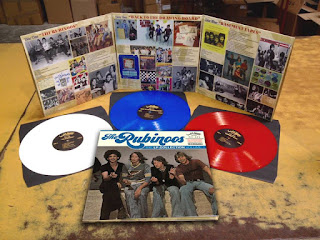 Ever since I first plugged this release at the '70s Teenpop Facebook page a few weeks back, I've been pretty psyched about it: The first three Rubinoos albums remastered on colored vinyl with new artwork and bonus tracks!  Talk about the perfect Christmas gift for yourself.  Well, if you're that sad...and I very obviously am.
And now it's finally here!  And it is everything it was hyped up to be, and then some.  It's a lovingly and carefully assembled package from the good folks at Wild Honey Records in Italy - clearly a labour of love.  It sounds and looks absolutely beautiful.  When the original albums are getting increasingly harder to come by on vinyl, what better way is there to get re-acquainted with all the early Rubinoo classics ("I Think We're Alone Now"; "Leave My Heart Alone"; "I Wanna be Your Boyfriend"; "Rendezvous"; "Hurts Too Much", et al.) than head on over to StripedMusic.com and order yourself a set.  I do believe it's one of them "Limited Edition" thingys.  And I swear I am not in any shape, way or form paid to do and say this - it is just that sweet of a deal.
San Fransisco and the Bay Area in the late '60s/early '70s, with its obvious and all-too-recent hippie history, seems like an unlikely place and time for a band like The Rubinoos to flourish in.  The Saturday morning cartoon bubblegum of The Archies and the DeFranco Family were more their kind of thing, although Rock & Roll, Doo Wop, R & B, and the classic Girl Group sound also played part in cementing the Rubes' sound.  "The LP Collection Volume 1" exhibits The Rubinoos at their best.
Already anxiously awaiting Volume 2 in the series...