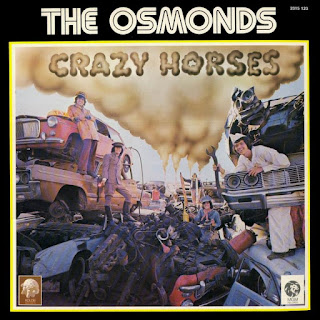 From the opening chords of "Hold Her Tight", a none-too-distant relative of - yup! - Led Zeppelin's "Immigrant Song", it is obvious that this is a very different sort of Osmonds album.

Twelve original Osmond compositions, produced by Alan the oldest Osmond and the brothers' regular producer Michael Lloyd, that are overall not only somewhat harder-rocking than the previous Osmonds albums fodder, but come with a message as well.  It is not a spiritual message, like their next album "The Plan" (1973) would bring, but an environmental one - decades before that would become the accepted norm in popular music.  Eat your heart out, Sting!
The title track is not only the single greatest thing the Utah born and bread brothers ever recorded, but also one of the greatest singles the 1970's ever produced.  Period.  Just ravel in its glorious unbound madness.  Why didn't they do more of this?


The would-you-believe-it semi-bluesy "Life is Hard Enough Without Goodbyes" (Is that a theremin I hear in there?!) is yet another style-breaking surprise.  And so is the mid-tempo "We All Fall Down", all horns and harmonies.
Thankfully though, the record is not without its dose of sweet Osmond balladry.  Admittedly, there's nothing here that equals 1974's "Love Me For a Reason" - that was still a couple of years ahead - but "What Could it Be" definitely ranks as one of their best ballads nonetheless.
﻿
Although some of their most memorable stuff was still yet to come (The aforementioned "Love Me For a Reason", as well as "One Way Ticket to Anywhere" from "The Plan") as far as I'm concerned, when it comes to the Osmonds, "Crazy Horses" is where it's at.  A solid, all-original album, and a classic kick-ass single.  You can't ask for much more than that.  The white Vegas-era Elvis jumpsuits we can - and should - just forgive and forget.
Posted by Hannes A. Jónsson at 3:41 PM