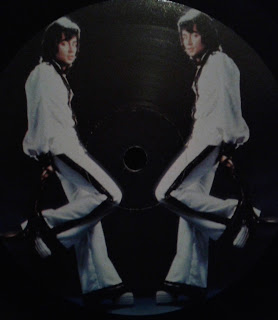 ﻿
These days, Barry Blue may be a big-time music mogul, involved in writing and/or production capacity with current teen acts such as The Saturdays, and Pixie Lott.  But there was a time when Barry himself was in their shoes...
Born Barry Ian Green in London in 1950, by his mid-teens he, as Barry Green, had already become a proper recording artist in his own right.  Furthermore, an early composition of his, "Rainmaker Girl", was recorded as a single B-side by none other than the late great Gene Pitney.
The next few years Barry spent working in music publishing as well as playing bass for the group Spice, which later became Uriah Heep.  By then, though, Barry had other plans.  Seeing songwriting as a more lucrative venue than as a mere artist interpreting other people's material, Barry Blue - as, by the early '70s, he was calling himself - had struck up a songwriting partnership with Linsey De Paul, and in 1972 De Paul hit it big with their co-composition "Sugar Me".


﻿
In 1973 Barry Blue signed a solo deal with the burgeoning Glam Rock/Teen Pop label of the day, Bell Records, and by mid-summer '73 he enjoyed his first - and biggest - solo success with the irresistible Zorba-the-Greek-goes-Glam single "Dancin' on a Saturday Night".
A number 2 U.K. hit, it was followed up with "Do You Wanna Dance", another top 10 entry in the autumn of 1973.
﻿
A self-titled debut solo album then appeared in 1974.﻿
A largely unrecognised minor Glam/Teen Pop classic, it's a joyous and versatile smorgasbord of the sounds and styles of the mid '70s; from opener "Don't Wanna Be Blue", all Greek guitars and stomping Glam beat - not unlike "Dancin' on a Saturday Night", to the proto-disco closer of "One Way Ticket (To the Blues)", the only non-original there.
"Kalamazoo" and "Rosetta Stone", a couple of more dance-oriented tracks, probably also prepared Barry for his production work with disco band Heatwave ("Boogie Nights") in the late '70s, while the gorgeous ballad "Queen of Hearts" could very well have been recorded by someone like label mate David Cassidy.
But inexplicably, Spector pastiche "Ooh I Do", another Blue/De Paul co-write and one of the album's key cuts, was given to De Paul who cut a vastly inferior version and had a summer of '74 hit with it.  Albeit a minor one.
The "Barry Blue" album was issued in two different sleeves in Europe: The upper one for Germany and Scandinavia, while U.K. and France got the lower one. 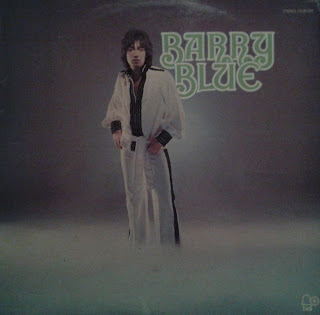 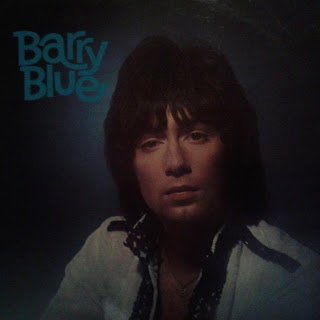 Oddly enough, the album wasn't a hit and all subsequent Barry Blue singles stalled outside the U.K. Top 10.  "School Love" reached number 11 in the spring of '74, while both "Miss Hit and Run" (#26, August '74) and the-almost-title cut of Barry's second - and last - Bell LP, "Hot Shot" (#23, October '74) under performed to a fault.
﻿
The "Hot Shots" album was an odd exercise in contract fulfillment.  Six new tracks, aforementioned singles "Hot Shot", "Miss Hit and Run" and "School Love" among them, paired with eight old tracks from the first LP, "Dancin' on a Saturday Night" and "Do You Wanna Dance" to the forefront, of course. 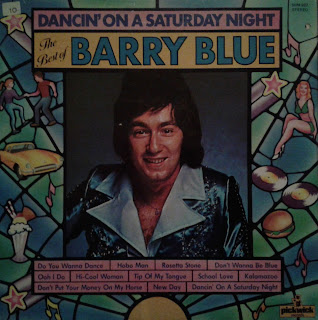 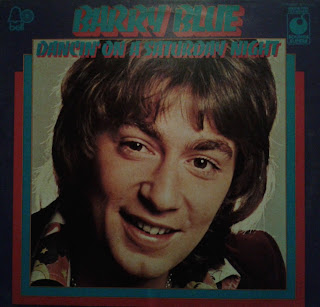 Barry Blue's spell at Private Stock Records during the next couple of years did not yield any hits, although some pretty decent singles were released.  "Tough Kids" (Barry later also produced the Dead End Kids version) and "Devil's Gun" (American act C.J. & Co. covered this in 1977 and enjoyed a worldwide disco hit with it) are definitive highlights.
After his '70s solo career ran its course, Barry, as earlier touched upon, took to producing acts such as Scottish Teen Pop band Dead End Kids (I may have blogged about them once or twice here before) as well as Heatwave - to name but two.
In the '80s he worked with both Bananarama and Five Star, as well as returning to the charts once more as a solo act under the pseudonym Cry Sisco!  Well, "Dancin' on a Saturday Night" it ain't...
﻿
Although there are a few fine "Greatest Hits" compilations out there, there was a truly excellent budget Barry Blue career retrospective issued by the Demon Music Group as a Music Club Deluxe double CD last year, which features all the best of Barry's work as an artist, songwriter and producer.  Say what you like, but the guy has done some serious genre hopping...