The Teen Queens of Noise 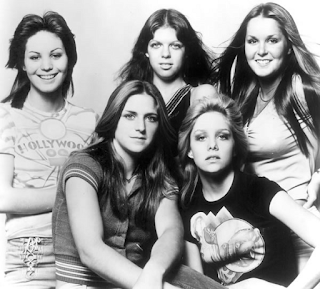 OK, this is a first - and possibly last - for the '70s Teen Pop blog: a feature about an all FEMALE act.
Although musically The Runaways had more in common with Kiss than Shaun Cassidy (but, reportedly, they covered Eric Carmen's "That's Rock & Roll" before Shaun ever did, although to my knowledge they never recorded it - just played it live), they still register as a bona fide '70s Teen Pop act, since I'm not even remotely near to starting a '70s Teen ROCK blog any time soon...


Love him or loathe him, Kim Fowley's got a gift.  During the mid-1970s putting together an all-female teenage rock group wasn't the most obvious thing to do.  But it certainly was an ingenious thing to do.  And Kim Fowley did just that.
Centered around a couple of talented California teens, Joan Jett (Guitar) and Sandy West (Drums), Fowley formed a band he named The Runaways from girls spotted around Hollywood under 21 clubs, such as Rodney Bingenheimer's English Disco and The Sugar Shack.
After names such as Micki Steele, who later re-emerged in The Bangles, and Peggy Foster had come and gone, the band's line-up was eventually completed with Lita Ford (Guitar), Jackie Fox (Bass) and the striking Cherie Currie on lead vocals. 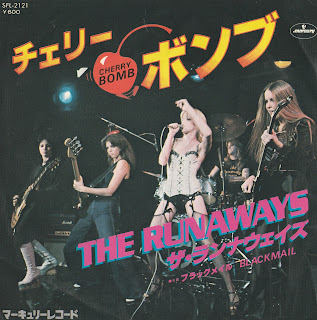 A deal was struck with Mercury Records and The Runaways' self-titled debut appeared in 1976.
And although the lead-off single "Cherry Bomb" failed to make an impact (at least in their native land) at the time, it is now considered a pop/glam classic.


As debut albums by a bunch of 16-17 year-olds go, "The Runaways" isn't a bad record.  But by no stretch of the imagination is it anything more than an interesting curio of its time and place.
"Dead End Justice", the album's craziest cut, fuses together over-the-top theatricals and melodrama not heard since the Shangri-Las were at their finest.

Today it is perhaps difficult to fathom why a an all-girl teenage ROCK group would be anything to write home about.  But in the mid-'70s, believe me, The Runaways definitely were one of kind.  Sure, there had been female rock bands like Fanny around before, but none of them had been as visually compelling or as musically aggressive as The Runaways were, and they were also hell-bent on carving their own niche in the then male-dominated music business.
It wasn't easy though.  Fowley was a tough taskmaster, to put it mildly, who made sure the girls stayed in line by employing only the most overbearing and merciless babysitters (Read: road managers and roadies) he could find, who in turn kept the girls in check on the road with seemingly endless supply of drugs and the promise of a big payday....which, of course, never came.
Relentless touring made the band a tight-knit unit on stage, but off it things were starting to unravel.  When Cherie Currie's unwanted pregnancy by the hands of the band's road manager, and, consequently, abortion, kept her out of the studio for much of the recording of The Runaways' second album "Queens of Noise", Joan Jett inevitably took over as the main lead singer of the band, whereas before Jett and Currie had split the lead vocals between them.


﻿
Much stronger and more musically varied than the first album, "Queens of Noise" hit the shelves in early 1977.
And in spite of the fact that Currie had now taken a back seat to Jett in the lead vocal department, one of the album's catchiest cuts, "Midnight Music", was all Cherie Currie...


﻿
Yet again though any considerable chart action eluded the band, although it was beginning to become all-too-evident that The Runaways were big business in the land of the rising sun, Japan.  Which, of course, is were they were hauled off to at the earliest opportunity.
In Japan, The Runaways recorded their third album, "Live in Japan", and lost their bassist Jackie Fox, so they were forced to finish the otherwise exhilarating and triumphant tour as a four-piece, with Jett taking over the duties on bass.
Upon arrival back in the U.S., one Vicki Blue was recruited as The Runaways' new bass player.
Still, straining relations within the band were a continuous problem.  Mainly between Lita Ford and Cherie Currie, which resulted in Currie's exit from the band almost immediately after the Japan tour.
The resulting "Live in Japan" album was a fine testament to how far the band had come, though, and an apt ending to the "old" Runaways, since changes were coming...


﻿
The "Waitin' for the Night" album had appeared by year's end 1977, and was obviously heavily influenced by the Sex Pistols and others of their ilk.
What could sometimes be a somewhat tiresome and unoriginal ordinary run-of-the-mill mid '70s American hard rock, was now replaced by the energy and bark the U.K. punks, although The Runaways lost none of their uniqueness in the process.  The Suzi Quatro-influenced scream'n'sneer was still at the forefront of Joan Jett's now sole lead singer delivery and the band appeared to be tighter than ever.


Although arguably the band's best album, behind the scenes things were still frail.  Fowley's tyranny was an understandable issue of content as the girls were quickly coming of age, and his management contract was promptly terminated following the release of "Waitin' for the Night".
﻿
Those classic and notorious "musical differences" also reared their ugly head during this era, with Joan Jett wanting the band to be more of a punk/glam/bubblegum conglomerate (Much as she, herself, became later on in her successful solo career), while Lita Ford and Sandy West seemingly opted for the good old-fashioned American hard rock approach.
In this state of flux, the band recorded their last album, the truly confusing "And Now....The Runaways" (1978).
Both image-wise and musically, coming across as a mixture of ABBA and Suzi Quatro, it was never going to work, and "And Now..." is The Runaways' least likable album.

And as if on cue, Vicki Blue quit the band after the fiasco that "And Now..." arguably is, being briefly replaced by Laurie McAllister, who played only a handful of shows with the Runaways - the last being on New Year's Eve 1978 - before the band effectively broke up the following spring.

Joan Jett, of course, is the most famous ex-Runaway, having led a successful solo career with the aid of her ever-present backing band The Blackhearts for over 30 years now.

Cherie Currie released a lacklustre Kim Fowley-produced solo album immediately after her exit from The Runaways.  Thereafter she teamed up with identical twin sister Marie Currie for one album, although acting became her main forte during the '80s.  Today she is a chainsaw sculptor (!)

Jackie Fox quit music and got into entertainment law after her short and, apparently, bitter experience as a Runaway.

Sandy West led a sometimes troubled life after the demise of The Runaways, never quite recovering from the break-up.  Sadly, she died of cancer in 2006.

Vicki Blue, now known as Victory Tischler-Blue, has become a successful documentary director, helming films about both Suzi Quatro and, of course, The Runaways.

Laurie McAllister fronted another Kim Fowley-created girl group, The Orchids, who recorded a sole self-titled LP in 1980.  Then she retired from music to work in the veterinary field.  She died in 2011.

Kim Fowley has been involved with the music industry in one way or another since his relationship with The Runaways seized to exist - just as he was before The Runaways ever came into being.  As of this writing, though, he is undergoing a cancer treatment in California.  We wish him well.

After all the books, documentaries and movies, there has, inevitably, been some talk of a Runaways reunion.  Apparently, Lita Ford and Cherie Currie are up for it, although Joan Jett has yet to commit to the project.

Update, Sept. 15, 2013:  I just finished reading the recently published "Queens of Noise: The Real Story of The Runaways" by American pop scribe Evelyn McDonnell, and can highly recommend that one as well.
A completely different beast to Cherie Currie's book, it's a serious and thoroughly researched study.  And although it contains some gaping errors (The Runaways supporting Metallica in 1977?!  Uh-oh, I don't think so), which always surprise me in such seemingly otherwise well thought-out labours of love, it delivers the goods and then some.  Not nearly as engaging on a personal level as the Currie book, which is a personal bio as opposed to a group bio, it does though - and succeeds I might add - to set the records straight for the Runaways - a band so misunderstood in their time that they can only be conceived as having been way ahead of that time.

Upadate July 12, 2015: Kim Fowley having lost his battle with cancer earlier this year, this sad and disturbing recollection of Jackie Fox hit the internet mid-summer 2015: The Lost Girls.


The Runaways - Official website
An excellent Kingsley Abbott interview with Kim Fowley﻿
﻿
Posted by Hannes A. Jónsson at 4:06 PM