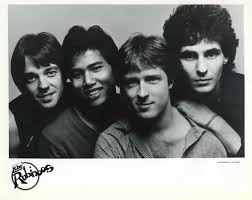 It's nothing less than mind-boggling to comprehend, but those lovable rascals the Rubinoos are currently celebrating their 45th year as a working unit.  And although only singer Jon Rubin and guitarist/main songwriter Tommy Dunbar still remain from the original pre-teen line-up (bassist Al Chan is also a longish serving/suffering member), it's pretty darn impressive to have stayed together this long, never mind sustained a career out of it (the band enjoys especially loyal following in both Japan and Spain), but to be still issuing albums of new and original material truly tops it all.
Admittedly, although primarily a big fan of their first two albums, 1977's "The Rubinoos", and 1979's "Back to the Drawing Board" (and the career-spanning "Everything You Always Wanted to Know About The Rubinoos" CD box set from a few years back is also a must), I haven't been keeping up much with the Rubes recently.  So, the other day, after reading a favorable review of their latest outing, the simply and aptly titled "45", I found myself inclined to improve on that sad situation.  And, upon heading straight to www.rubinoos.com I dutifully ordered their two latest CD's, the aforementioned "45", as well as 2010's Spanish-import "Automatic Toaster" - not to mention, for good measure, an XL-sized T-shirt.
In 2010 the Rubinoos teamed up with Power Pop legend and former child actor (I'm not even going to mention cousin Oliver here!) Robbie Rist, who not only produced the "Automatic Toaster" album, but also played drums on it.  Clocking in at just under the half hour mark, it's a sparse and to the point effort.  It's also ample in energy and sheer power...pop, as opener "Two Guitars, Bass, And Drums" very ably demonstrates, like this live version from Spanish television perfectly proves.


The Rubinoos' goofy, Monkees-like humor is also never too far from the precedings, which might be one of the reasons why "Earth #1" was also recorded for their children's album(!) "Biff-Boff-Boing!" (2010).
﻿
All in all, "Automatic Toaster" is an enjoyable﻿ and hook-heavy Power Pop primer from true masters of the genre.  The wheel isn't exactly being invented here but who cares.  Only unnecessary cover "Black is Black" and novelty (children's?) songs "Zombie Night in Madrid" and "Cave Girls" test this listener's patience.
*** (3 out of 5) 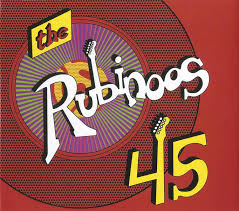 Four years later and we're up to date with the brand-spanking-new Rubinoos album "45".  Off the bat,  it's obviously not quite as energy-driven as its predecessor.  The guitars have been turned down a tad, there's balladry a plenty and the Rubes' love of early pop styles such as Doo Wop is very well served indeed - especially in the sole cover here which comes in the form of Lou Christie's "Rhapsody in the Rain" (their cover of Christie's "If My Car Could Only Speak" from a good decade back is excellent and far exceeds the original IMHO).  Their love of Richard Berry's Garage Rock classic "Louie Louie" is even addressed in, well, "I Love Louie Louie".  But it wouldn't be a proper Rubinoos album without the pure pop hooks and here they are in abundance.
Unfortunately there don't seem to be any videos to songs from the album on the otherwise almighty YouTube, so you, much like I did, just have to head over to www.rubinoos.com and order the ACTUAL CD - you won't be sorry.
**** (4 out of 5)
And yes, the T-shirt's very comfy.  ***** out of 5, as a matter of fact :-)
And just in case you aren't entirely convinced of the Rubinoos proper '70s Teen Pop credentials, here are a few minor, near and non-hits they scored during the latter part of that fabulous decade.  Enjoy...
﻿
Update, February 10th 2015.
I received the following e-mal from Rubinoo Tommy Dunbar yesterday:
Thanks for the nice review of our recent recordings, glad you liked them! I only wanted to mention that our drummer Donn Spindt has been with us since 1970. He was off doing other things for a moment in the 80s, but he's been with us almost all of that time. Our bass player (Al Chan) has been with us since 1980. He's the NEW guy! ;-}
Duly noted, Tommy.  And sorry for the blunder!  Rock & Roll on :-)
Posted by Hannes A. Jónsson at 1:47 PM