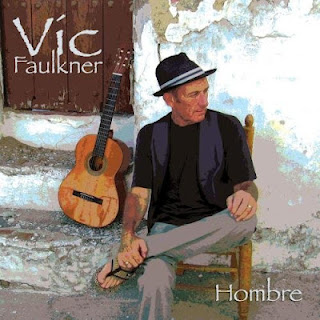 From circa 1971 to '79, Vic served as a bass player for one of the most underappreciated British acts of the '70s - Hello.
Primarily perceived as Glam Rock (after all, some of their key records were produced by Gary Glitter/Glitter Band producer Mike Leander), although their '70s Teen Pop credentials can not be questioned either.  In 1972, at the time of their first released record, they were all aged 16.  And during their mid-'70s heyday they regularily appeared on the pages of top European teen mags such as Jackie, Bravo and Pop.
Water under the bridge.  The story of Hello can be found elsewhere in this blog.  So, fast forward some 30 odd years....
Far behind are his days as a globe-trotting teenaged pop star, Vic Faulkner now resides in Spain playing the occasional acoustic gig at the local bar.  I suppose there are worse ways to spend one's semi-retirement.
In 2010, Vic released his first solo CD "Hombre", which he followed up a year later with the aptly named "My Teenage Soundtrack" - a book focusing on his formative years with Hello in the '70s. 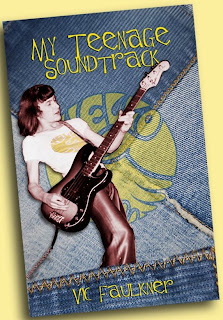 "Hombre" is a pleasant surprise to say the least.  Vic never contributed songs to the Hello repertoire, but for the past 30 years he seems to have developed into a pretty decent songwriter.  Nine of the fifteen songs on the CD are penned by Vic, while the remaining six come from his partner in crime Michael Cashmore-Hingley, who is also in charge of both the CD and book artwork.
"Hombre" is very atmospheric; all laid back, understated and relaxed with a suitably sparse percussive backing.  It oozes the charm of a warm Spanish evening just after the sun has set.  In my imagination at least, since I've never even been to Spain!

The opener "Road Song" is a particular favourite.  (Vic can be seen in the video above performing the song, seemingly, in his kitchen.  Perhaps the very same kitchen the album was reportedly recorded in).  "Star Studded Sham" it isn't, but it's all the better for it.  Another time, another place indeed.
Meanwhile, the suitably melancholy and minimal "Alone Without You" and "Single Life" hit you right where they're supposed to, while "Senorita" and "Young at Heart" provide slightly lighter moments.
The subject matters are pretty universal: life, love, loneliness and the occasional drink.
But overall "Hombre" is a strong selection of intimate and personal songs.   Well done, Vic!

"My Teenage Soundtrack" is a slim publication (mere 152 pages containing large print and numerous illustrations by the aforementioned Michael Cashmore-Hingley) which can easily be processed in one sitting during the approximate time it takes "Hombre" - or for that matter, "The Best of Hello" -  to play through.
It is clearly not supposed to be THE story of Hello or any such thing - only the author's own recollections of people, places and events.  Like Vic explains in the introduction, "Others who were there may remember things differently, but I lay before you MY recollections, not theirs."
And as such, it works very well.  Although I personally would have liked to get a lot longer book which would take into account things like recording sessions, stories behind certain songs as well as the dynamics and the relationships within the band itself, that would be an altogether different beast to say the least.  And perhaps not a viable propostition to the casual reader with only a fleeting interest in the era's music and the people behind it.
Nonetheless, one of the book's more entertaining sections is where Vic entails close - and in the case of ABBA's Agnetha, not that close - encounters with other stars of the time.
Amusing run-ins with the Osmonds and the Bay City Rollers is another highlight.
All too many bands from the '60s, the '70s and the '80s were mis-managed and ended up virtually penniless while their agents, lawyers and managers seemingly lined their pockets with the profits.  And Hello, it appears, was no different.  Their manager David Blaylock being the main culprit and, in the process, using the band as a stepping stone to launch Hello guitarist Keith Marshall as a solo act.
However, Vic holds no serious grudges.  He's still on good terms with Hello lead singer/guitarist Bob Bradbury, but both have sadly long since lost contact with drummer Jeff Allen and guitarist Keith Marshall.
A quick, enjoyable and easy read which no serious Glam or '70s Teen Pop fan should miss.