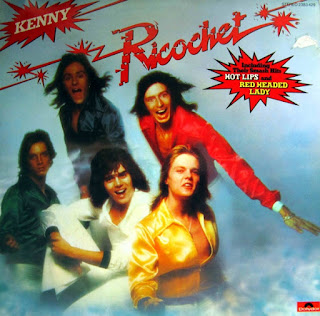 At long last having finally acquired their second - and final - long player "Ricochet", my Kenny collection is now complete.  Previously I only had access to this LP via "The Best of Kenny" CD (REP 4510-WG, Repertoire Records 1994), which, among other things, contains the entire album.  The vinyl however - only issued in Germany and Japan in 1976 - is rather scarce and, more often than not, pricey.  In a blog I posted on February 16. 2011, I had this to say about "Ricochet":


For the most part the new material was self-penned and, unfortunately, rather unremarkable forgettable MOR pop.  Aside from the singles, both of which were written by people outside the band, and a passable version of the old Jackie Wilson hit “Higher and Higher”, “Ricochet” is a rather weak record.


Well, I was wrong.  Although it's most certainly no "Pet Sounds", "Ricochet" is a fairly ambitious album made by a band clearly desperate to prove itself and to be taken more seriously than it previously had been.  Too bad then no-one was really listening.
But why the change of heart, some might ask.  Well, the short answer is that the album just sounds so much better on vinyl than it ever did on CD.  I know, I know - that sounds like a typical and currently fashionable vinyl snob's answer.  But it is true.  Instead of the flat and "clean" CD sound, the songs sound crispy and dynamic and literally jump at you from the speakers.  Unfortunately not all old vinyl records sound this good - all too many actually sound like s**t - but this is clearly a quality German pressing which does the music full justice.
And although I still stand by my initial verdict that the non-group originals are the best things on display, there still is plenty more to enjoy here.  The pure pop of "You Wrote the Words" and "Go Into Hiding", the funk-lite of "I'm Coming Home", as well as the rockin' "Be My Girl" all being relatively strong.


No longer the second division Bay City Rollers of yore, with "Ricochet" Kenny were clearly taking a credible stab at establishing their own artistic identity apart from writers/producers Martin/Coulter, with which they had parted company before recording the album.  Unfortunately though, as I said before, no-one was really that interested and Kenny quickly faded into obscurity.  Like many other mid '70s teen pop acts - Rollers, Slik, et al - changing musical fashions (Punk, Disco) also had a hand in their ultimate demise and disappearance from public view.
That said, with "Ricochet", Kenny certainly went out in style.
Posted by Hannes A. Jónsson at 2:23 PM