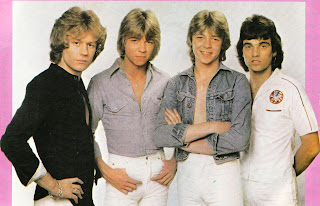 When you google "Child 70s band", one of the top results you get is this question posted on a site called doyouremember.co.uk some time back: ,,Does anyone remember the 70's pop group called Child, there were good looking twins called Tim and Keith Atack in it, nobody seems to remember them".
Although a few years have passed since the question in, err, question was posted, nothing much seems to have changed in regards to info on Child on the world-wide-web.  Sure, there are sites like discogs.com, which list all of their records and many of their T.V. appearances can now be found on YouTube - thanks, it seems, largely to a certain someone very close to one of the band's members.
As for finding any of their music in digital form, the story is pretty much the same.  In spite of the fact that the band had three U.K. Top 40 hits in the late '70s, at a time when teen acts were scarcely seen on the charts, not even their sole Top 10 success and artistic nadir, 1978's "It's Only Make Believe", can be easily found anywhere today.  To the best of my knowledge, it was last heard on CD twenty years ago, when it popped up on EMI's budget MFP compilation "20 Songs of Love from the 70's".
Formed in Yorkshire, England, in the mid '70s, Child first consisted of Graham Bilbrough (Vocals); Dave Cooper (Guitar) and twins Keith (Bass) and Tim (Drums) Atack.
By early 1978, before the band signed a deal with Ariola Hansa, Cooper had left and was replaced with bassist Mike McKenzie (Formerly of Pat McGlynn's Scotties) while Keith Atack switched to guitar.  It was this line-up which enjoyed a short-lived and, by some, fondly remembered success in 1978/1979.
However, Child's first single, a surprisingly "heavy" (Compared to their later output) cover of Scottish rocker's Alex Harvey's "River of Love" was issued on the indie imprint BUK Records in the summer of 1976.
"Maybe Baby Someday" became another BUK-released single in September of the same year.  Needless to say, in spite of some teen magazine and T.V. coverage, chart success eluded both efforts.
﻿
﻿
The third single, "What's a Nice Girl Like You", appeared on another indie label, Pentagon Records, in April 1977.  Around the same time Child's debut, self-titled, Long-Player was released.  At least in Germany.  My research hasn't, as of yet, unearthed a U.K. release of this rarity.  However, if anyone has any info whatsoever, do not hesitate to share it with the rest of the class.


CHILD - "Public Enemy Number One" (German single, 1977) (Audio)﻿
The band seems to have taken a break from recording for the next year until, that is, they popped up again on Ariola Hansa in March '78, with their first chart hit (U.K. #38) - a passable cover of the Jackie DeShannon classic "When You Walk in the Room".
﻿And during that summer they enjoyed their biggest hit, the aforementioned "It's Only Make Believe" - a cover of a song Conway Twitty first popularized twenty years previously.
The oddly entitled "The First Album" - seeing since it was their SECOND album - was then unleashed in order to capitalize on this sudden change of fortune.  The ballad "Still the One", the third Ariola Hansa single, however failed to chart in the autumn of 1978.
﻿
In April of 1979, Child's last chart hit, "Only You" - a cover of the Platters tune, was issued and peaked at #33 in the U.K. charts.
Followed by third L.P. "Total Recall", which consisted only of the tried and true; covers of songs from the '50s and the '60s ("It's Only Make Believe" and its B-side, Carole King's "It Might As Well Rain Until September" even made a re-appearance), it was a weak and unimaginative effort, thrown together in a last ditch attempt to cash in on something that really wasn't there anymore.  Regretfully, the record just reeks of contractual fulfillment.
Still, a couple of more singles were culled from it; the non-LP B-side "Caroline and Me" being the best of the bunch.
Not surprisingly then, the hits - as well as the inspiration - having dried up, Child seem to have split up in 1980.
CHILD - LIVE 1978

In the early '80s, the Atack twins popped up on Limo Records, the same label as Rosetta Stone recorded for at the time, with a couple of well-meaning, albeit out of time - and touch - Teenpop single releases (See discography below).  Too little, too late.
Later on in the decade the twins recorded a sole single as The Duel.  They then toured with an assortment of artists, such as Bonnie Tyler and Rick Astley, before Keith formed the Illegal Eagles, an Eagles tribute band of all things, while Tim ventured into film soundtrack work, where he is today a moderately successful artist having composed music for a couple of Ricky Gervais's films, and then some.
Original guitarist Dave Cooper currently plies his trade in cover band Coast - "Yorkshire's Premier Pop Rock Band."
Singer Graham Bilbrough still records and performs under the name of Ricky Graham.  Several of his somewhat recent performances can be seen and heard on YouTube.
Mike McKenzie - a motorcycle enthusiast - is still around, although I am not quite sure in what exact musical capacity these days.  I know after his tenure with Child he briefly rejoined his old pal Pat McGlynn in the early '80s, but since then....who knows?  I managed to contact him a couple of years ago, and after an initially positive response to my inquiries regarding the overall story of Child, I didn't hear from him again.  The same can be said of my efforts trying to stalk Tim Atack.
So, if anyone close to the band - not to mention band members themselves - are ready, willing and able to shed some much-needed light on the history of Child - a '70s band - by all means, please do.... 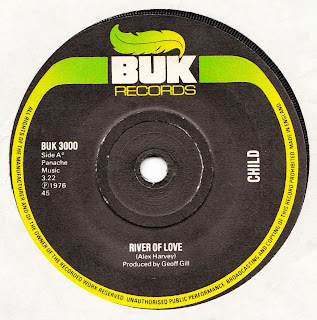 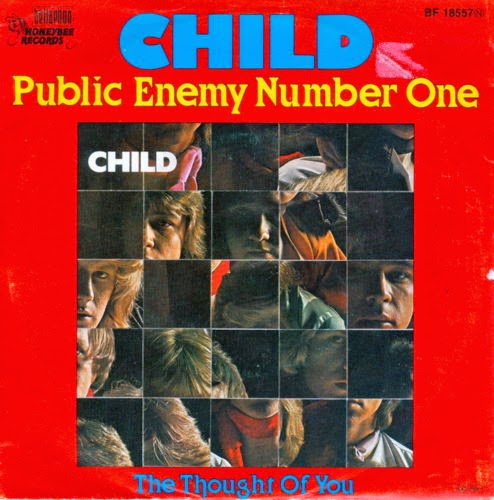 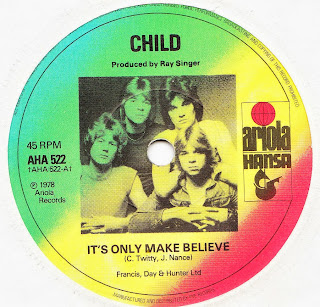 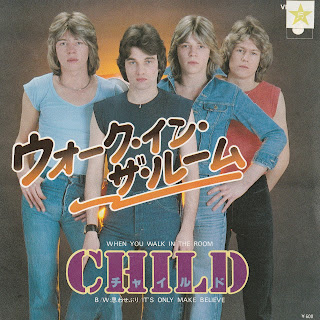 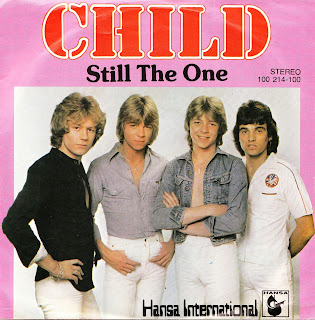 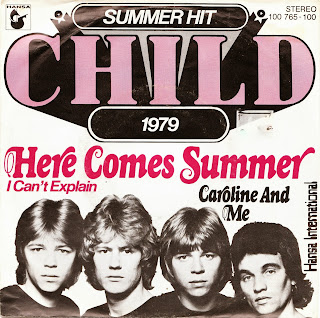 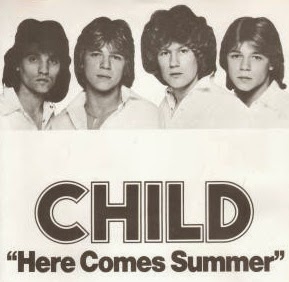 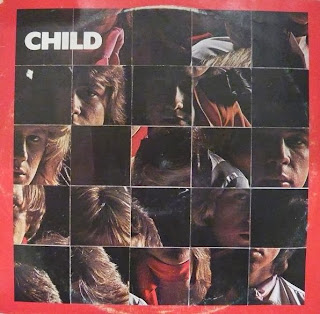 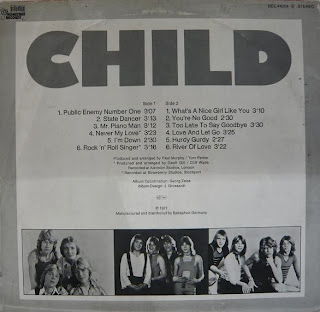 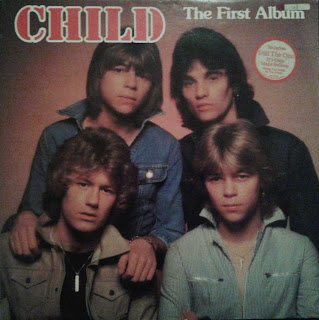 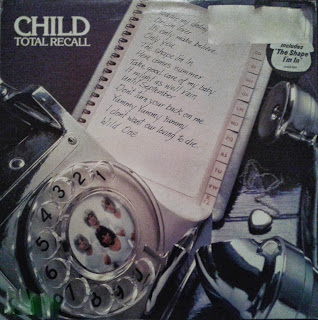 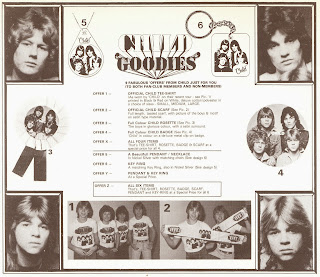 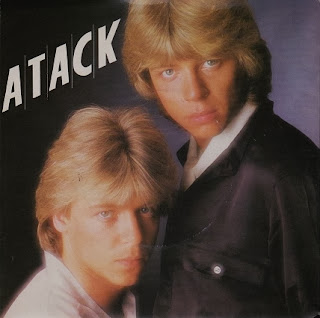 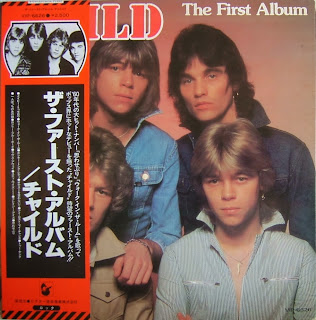