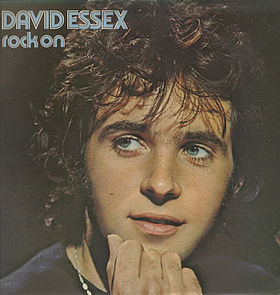 OK, time for a yet another Teenpop dilemma.  Strictly speaking, it may be a stretch to label this guy Teenpop.  Especially since he's such a versatile performer of stage and screen and has been so for the past 40 years.  But he was a teen idol at the very beginning of his career in the early '70s, and that's good enough for me.

I've just read his bio, "Over the Moon", and it's an interesting read.  Let me just say I'm a sucker for music biz types bios of this kind, having just recently also immersed myself in similar accounts by both Rod Stewart and Pete Townshend.
Born David Albert Cook in London's East End, Essex grew up poor and didn't receive, shall we say, a "proper" and good education.  Football was his first love (He actually played for the West Ham United youth team), but music took over during his formative years.  He started out as a drummer but was soon enough spotted (No doubt due to those blue eyes) as a potential front man and from then on he was always positioned behind a microphone.
Several flop solo singles were released during the late '60s, and some theatre work followed as well.  It wasn't until he starred in a hit version of the musical "Godspell" that things started happening for our hero.  Next came the film debut "That'll Be the Day" (Co-starring Ringo Starr), and his musical breakthrough "Rock On" then catapulted him onto superstardom in 1973.  And the rest, as they say, is history.


An odd, almost experimental slice of theatrical pop, once heard "Rock On" is not easily forgotten.  Almost - as is Essex's follow-up single "Lamplight" - in Steve Harley & Cockney Rebel territory, it's not exactly something one can easily imagine the Cassidy's and the Osmonds' of this world to ever to have come up with.  No offense!  Yet it made David Essex a teen idol of similar magnitude to that of
both the Osmonds and David Cassidy.
Although "Rock On" had hit big in the U.S. as well as in the U.K., Essex's reluctance to tour much abroad (At this stage he had a wife and a young daughter at home) pretty much ruined his chances of any and all lingering Stateside success.
"Essex Mania", though, lasted throughout 1975 in the U.K. where the wonderful "Hold Me Close" hit number 1 in the fall.
After that his popularity waned somewhat, although he continued to have hits well into the '80s.  In my opinion, "Cool Out Tonight" from 1977 is one of the better ones, but it merely reached #23 in the U.K. charts at the time.  Today, it sounds like a great lost Smokie single....
Wisely, Essex has always diversified his career between music, theatre, T.V. and film work...and even managed to squeeze charity work in there somewhere!  A couple of marriages, kids and grand kids also take time and effort, you know!
The guy has nary a bad word to say about anyone.  Except, er, David Cassidy.  Yes, during a '70s Teen Idols package tour in 2004 it seems that there may have been some disagreement between the two David's about that classic showbiz bone of contention: billing.
Admittedly, stories about Essex's stint on the U.K. T.V. soap "Eastenders" (That's the "Moon" which is referred to in the book's title - apparently he played someone called Eddie Moon on the show) and its plot's twists and turns went somewhat way over my head.
But with (other) entertaining showbiz ti﻿dbits about everyone from Keith Moon to Richard Burton, via Bob Dylan, Paul McCartney, and John Lennon (All fans, apparently), "Over the Moon" is an interesting and entertaining account of a life spent, pretty much, centre stage.
Rock on!﻿
Posted by Hannes A. Jónsson at 3:03 PM