The James Boys and me.

From that very first hastily and impulsively-written Mabel piece a year and a half ago, the main purpose of this blog has been to uncover all the little known and well-hidden in the mysterious and murky world of '70s Teenpop, or at the very least to shed some much needed light upon it.
A genre obviously many are (still) interested in, but very few seem intent on seriously dealing with (even 40 years on it's perceived as kid's stuff; not really "serious" music... bubblegum.  Well, some things never change and music snobbery is one of them).  And since the feedback I've gotten has all been kind and appreciative, there most certainly seems to be a "need" for all this.  A method to my madness, if you will.
The idea came to me when I was trying to google all those wonderful acts I remembered from my youth....Buster, Kenny, Hello, Dead End Kids, Mabel...and usually came up with very little or nothing.  And there within lies the problem; all too many times I start out with only the old worn-out record lying in my lap as the only evidence this or that act ever existed.  The www. is all too often of no or little help.  This stuff has to be put up by someone in the first place in order for someone else to google it!  It just doesn't magically appear there out of thin air.
Occasionally ex-band members or someone associated with those acts is willing to help.  Admittedly, the www. is good for locating all sorts of people, but most of the time one's e-mails are never answered.  Understandably, perhaps.  Not everyone is interested in digging into the past. 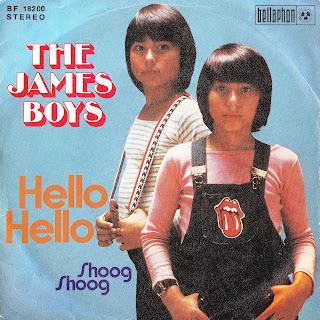 And that brings me to the featured act this time around: The James Boys.  Not that I ever tried to locate them or anyone close to them, because there's absolutely nothing of any substance on line to point one in that direction.  And even for me, this is a bit left-field.  These guys were pre-teens of the Little Jimmy Osmond/Lena Zavaroni variety...child stars.

There have been at least two recording acts operating under The James Boys' monicker through the decades.  A U.S. Rock & Roll act in the '60s and our heroes in the '70s and the '80s. 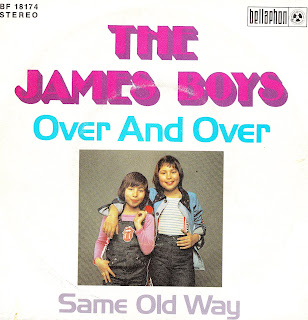 Formed in 1972 in Chingford England, Bradley Grant (Born 22/12/60) and Stewart Glen Palmer (Born 6/03/62) were seemingly instantly signed to Penny Farthing Records and immediately rushed into the studio with producer, label owner and all-around music biz legend Larry Page (former manager/producer of The Troggs in the '60s, as well as having had a hand in managing the Kinks around the same time), to produce their first single "Hello, Hello" which was issued in 1973.
Co-written - as was much of the boys' earliest output - by label mate Daniel "Beautiful Sunday" Boone, this song is catchy as hell and is in my opinion their finest hour.  A big hit in Germany, it failed to make an impact on the U.K. charts, but just have a look-see at the infectious performance on Germany's Disco TV-program in early 1974.  The little one (presumably Stewart Glen) is just sooo into it, it's near impossible not to be oddly moved by it...

Their Debut album "Introducing the James Boys" followed shortly thereafter.
Along with aforementioned single sides, filler such as covers of other Penny Farthing acts' hits like Daniel Boone's "Beautiful Sunday" and Kincade's "Dreams Are Ten a Penny" were given another airing...

The next James Boys single, "Keep Moving", appeared in 1974.  The formula was somewhat tiring, yet German success was guaranteed when a German-language version was recorded, as had been the case with "Hello, Hello" a year earlier. 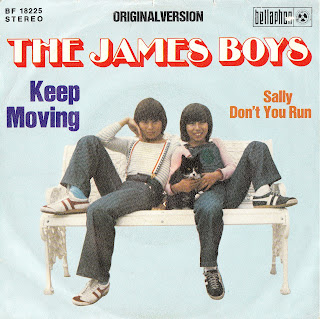 ﻿
A second long-player, "Here Come the James Boys", came out in 1975 and some further singles such as a cover of the Everly Brothers' "Wake Up Little Suzie".  But by then the bubble had well and truly burst, it seems, although the boys managed to move onto somewhat greener pastures and by the late '70s were signed as songwriters to ATV music where they were supplying songs to the likes of the Nolan Sisters.  And as late as the mid-'80s the James Boys were still performing as a duo on the U.K. cabaret circuit, sporting residing hairlines and white tuxedos.

However, after that the trail goes completely cold...

Update, 26 March 2018: Recorded as James Brothers in 1980, produced, separately, by both Barry Blue and Miki Antony.

The James Boys on Boysoloist.com﻿
Posted by Hannes A. Jónsson at 7:15 AM