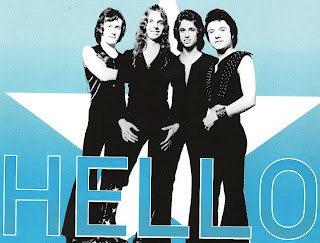 In 1969, four 13-year-old North-Londoners formed The Age.  But after Bob Bradbury (Vocals, Guitar), Keith Marshall (Guitar), Vic Faulkner (Bass) and Jeff Allen (Drums) met up with former Zombies roadie David Blaylock who became their manager, they changed the group’s name to Hello.
They then gathered some valuable professional experience on the live circuit by backing singer Caroline Hall for a year.
After securing them a deal with Bell Records in 1971, Blaylock drafted in songwriter Russ Ballard (from the band Argent – lead by ex-Zombie Rod Argent) to pen for and produce the newly signed Hello.
The first two singles, “You Move Me” and “C’mon”, both issued in 1972, received some airplay although chart success eluded them entirely.  Understandably, the burgeoning U.K. glam rock scene was the obvious inspiration for the youngsters.
But in an August 1972 issue of Record Mirror, manager David Blaylock not altogether unreasonably claimed “…that they [Hello] have tremendous appeal for teenyboppers”.
Next single, the self-penned “Another School Day”, emerged a year later and although it didn’t bother the charts, a progress was evident in both the band’s sound and approach to its craft.
Nonetheless, Bell Records saw reason to get Gary Glitter and Glitter Band producer Mike Leander into the fold for the next 45 – a cover of the Exciters’ classic Girl Group smash “Tell Him” for an October ’74 release.  And finally that elusive hit emerged.  A #6 placing in the charts was secured and Hello were on their way.  Or so it seemed.
A cover of the Glitter Band’s excellent “Game’s Up” was selected as the next Hello 45.  Puzzlingly, though, chart action was non-existent.
Extra-curricular activities at this point in their career included an appearance in British B-movie “Side by Side”, starring Barry “Dame Edna” Humphries, and as a supporting act on tours by both Smokie and label mates Bay City Rollers. 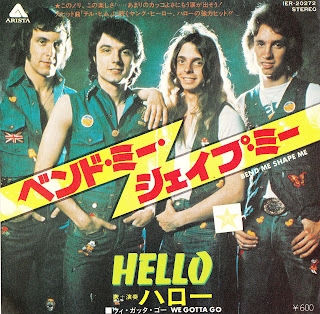 ﻿
Yet another cover version, this time around American Breed’s “Bend Me, Shape Me” (Amen Corner had the ‘60s hit), became the next Hello 45 RPM flop in the spring of 1975.
But the best was yet to come.  “New York Groove”, a Russ Ballard-composition they had demoed a couple of years before (finally heard on the various artists LP compilation “The Great Glam Rock Explosion”, BIFF! Records, BIFF 3, 1988), became a Top Ten smash in the autumn of 1975.
Arguably their most memorable recorded effort it not only cemented Hello’s reputation in ‘70s Pop, but was also the initial major success of its creator.  By the decade’s end Russ Ballard was one of the world’s most sought-after tune smiths, penning hits for nearly everyone from Hot Chocolate to (Ritchie Blackmore’s) Rainbow, via ABBA’s Agnetha and Frida (separately) and Santana.
In 1979, Ace Frehley from Kiss scored a U.S. Top 40 solo hit with his rendition of “New York Groove”. 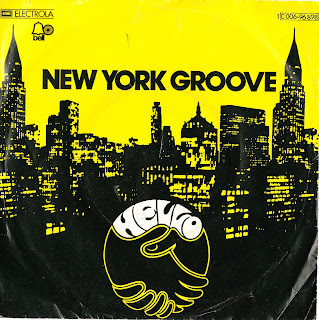 ﻿
In spite of “New York Groove” reaching the U.K. Top Ten, Hello’s next single release was a total bust.  Another top-notch Russ Ballard composition, “Star Studded Sham” somehow failed completely to capture the public’s collective ear although it received considerable airplay and was promoted visually on such T.V. shows as the highly rated Mike Mansfield’s “Supersonic”. 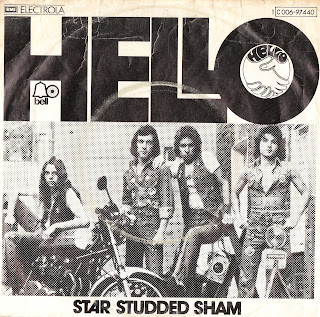 ﻿
Hello’s first long-player, “Keeps Us off the Streets”, then appeared in late 1975 but failed to crack the album charts.
Although Hello had recorded a wealth of original material, some of which was of considerable quality – as is evident by the massive amount of “previously unissued” songs which have appeared on numerous CD releases since the late ‘80s (Chinnichaps "Dynamite" was for instance originally recorded by Hello who decided not to release it at the time only for MUD to have a Top 5 U.K. hit with it) – the album, regretfully, was littered with “fillers” such as covers of hits from the ‘50s and the ‘60s, as was the mid-‘70s norm.
Two original compositions from the album, the title track and “Teenage Revolution”, both written by drummer Jeff Allen and his brother Chris (later to achieve fame in his own right as Chris Cross of Ultravox) were issued as a promo-only single in May 1976.
Next to be roped in was former Bay City Rollers and MUD writer & producer Phil Wainman  who provided the wondrous “Love Stealer” which became the next Hello single release in the summer of ’76. 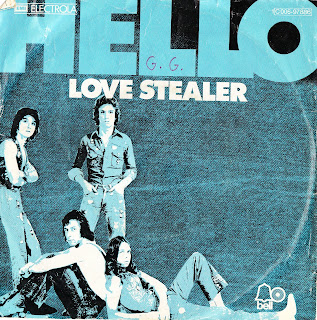 ﻿
On the home front, once again, success was nothing if sparse although this was one of Hello’s highest rated German hits – a territory they, wisely perhaps, increasingly focused on from then on.
As Bell Records infamously morphed into Arista, Hello once again switched producers to former and future, respectfully, Rollers collaborators Colin Frechter and Bill Kimber for some further excellence on the German-only singles front; Keith Marshall’s and the Allen brothers’ “Seven Rainy Days” in particular.
The second Hello LP was a Japan-only affair; “Shine on Silver Light”, issued in 1977.  A pleasant hotch-potch of mostly self-penned songs in several stages of musical progression helmed by the various aforementioned producers as well as ‘old-timers’ Russ Ballard and Mike Leander.
Originally the album was also slated for a release since its title track was issued in single form there and was promised to be “From the forthcoming album…”
In meanwhile, there was a “Greatest Hits” album issued, as well as a “BRAVO Presents” compilation.
A label switch to Polydor resulted in the German-only third Hello album, the aptly titled “Hello Again” in 1978.
By now moustaches, open-shirts revealing various amounts chest hair and disco were in vogue thanks to Messrs. Gibb and Travolta.
Unfortunately Hello saw fit to follow suit…so to speak.  Apart from a couple of near career highlights – “You Shot Me Down” and “Machine Gun Hustle” – this record was their weakest.  And, not surprisingly, their last.
“Feel This Thing” was their single non-LP swansong in 1979.  A far-cry from “New York Groove” or “Star Studded Sham”, it was the end of an era…as well as a decade of aurally and visually compelling music.
After the demise of Hello, Vic Faulkner seems to have fallen off the radar for a while.  But after I tracked him down recently and asked him what he'd been up to, he sent me the following message:  "I can tell you that I live in Spain now where I still perform, write and record and am currently involved in another two or three projects. Enjoying life sun sea and sangria!!!"
In 2010, Vic released his excellent solo album of original acoustic material, "Hombre".  It's available at www.amazon.com
In October 2011, his autobiography "My Teenage Soundtrack" was published.  It is also available at amazon.com. 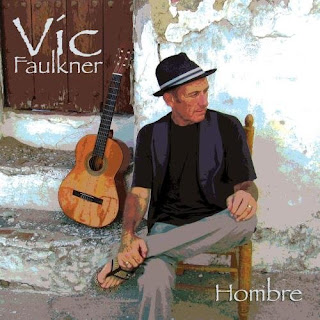 Keith Marshall, as a solo act (sometimes with Jeff Allen on drums), enjoyed some success in the early ‘80s – especially in .  His “Only Crying” was a world wide smash in 1981; its sound clearly echoed “New York Groove” though.  He also did some production work for other acts.
Jeff Allen released some solo material as well – some of which bore a certain resemblance to his best work with Hello, which is not a bad thing.
Bob Bradbury resurfaced in the early ‘90s with an entirely new Hello line-up.  This writer was lucky enough to catch them live in in the summer of 2011.  Perhaps more than ever, a fantastic romp thru Hello classics like “Let it Rock”, “Love Stealer”, “Tell Him” and, of course, “New York Groove” is just what the world needs now… 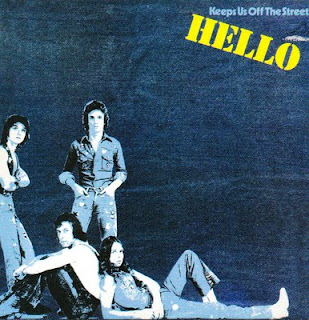 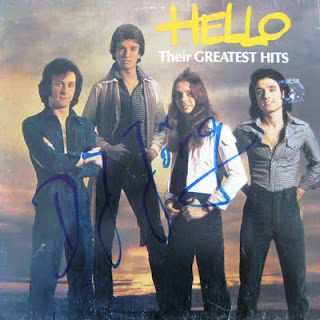 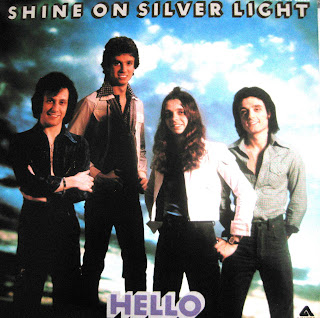 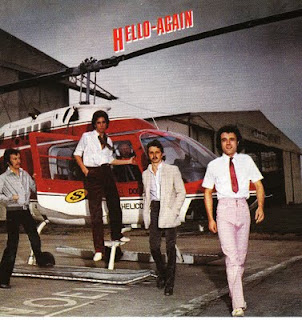 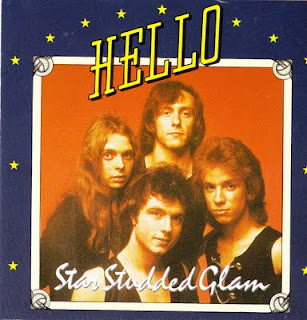 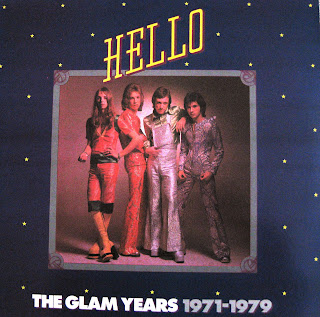 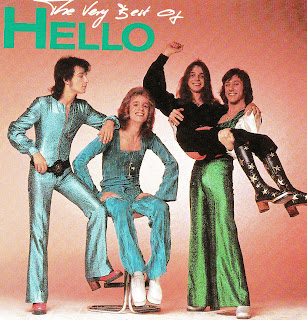 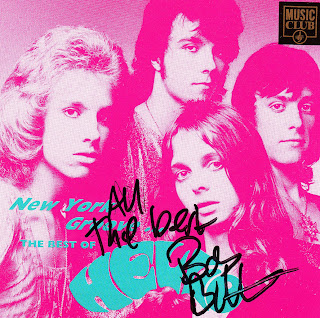 Signed here by singer Bob Bradbury, this is a British Music Club compilation from 1991 , "New York Groove - The Best of Hello". 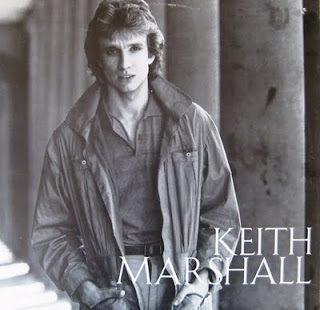 Keith Marshall enjoyed some solo success in the early '80s - especially in Germany, although "Only Crying" was a worldwide smash in 1981.  This is his self-titled solo LP from that year also. 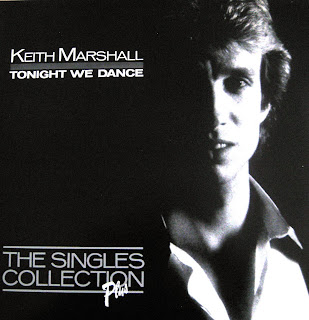 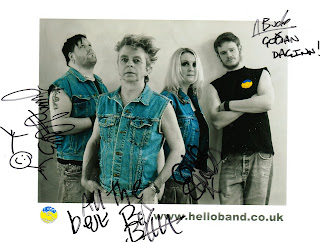 And, quite possibly, the greatest TOTP performance ever!  Even Sir Cliff had the good sense to cover this song...