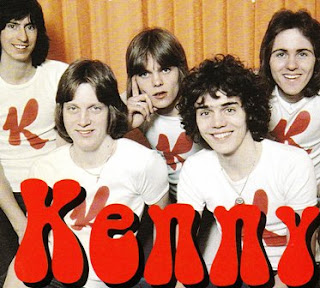 This piece was initially written for and published at The Glamrocking of the '70s website.

Originally known as Chufff, a North London Progressive Rock outfit which had supported the likes of Hawkwind, The Edgar Broughton Band, and The Troggs, Kenny were brought to the collective attention of successful writing/producing team Bill Martin & Phil Coulter (Sandie Shaw, Cliff Richard, Bay City Rollers) in late 1974.  The pair needed a band to promote a single they had just recorded with British session singer Barry Palmer.  “The Bump” was that song and it had previously been recorded as a Bay City Rollers B-side.  Martin and Coulter had other ideas however, and were convinced the song had a more promising hit potential.

M/C had just been relieved of their duties as tunesmiths extraordinaire for the Rollers – for whom they had written and produced four consecutive U.K. Top 10 singles, as well as a number one album.  But M/C thought they had more to offer the world and needed another vehicle for their particular brand of glammy teen pop.  And that act, they thought, was Chufff.

In 1973, Martin and Coulter had scored a couple of modest hits with an Irish showband singer named Tony Kenny, who tired quickly of the “pop star” act and returned to where he had come from.  These songs – “Heart of Stone” and “Give it to Me Now” (the latter of which can also be found on the Rollers’ debut album “Rollin’”) – were issued under the artist name of Kenny.  Therefore, being savvy businessmen as well seasoned music industry moguls, M/C knew a previously established brand name was nothing less than ideal for the new venture.

With “The Bump” already riding high in the charts where it eventually reached the no.3 position, the newly-christened Kenny group embarked on a promotional tour of sorts where they could be found miming along to the hit single on television shows such as Top of the Pops – a crucial promotional tool in those pre-MTV days.  And although causing a minor controversy with their “K” logo which looked almost identical to that of Kellogg’s Corn Flakes, that did nothing but raise their media profile even more.

A follow-up single “Fancy Pants” was issued in early spring ’75 and reached no. 4 in the British singles charts.  It followed the same formula as “The Bump” - from the high-pitched vocals of the chorus to the nearly spoken deep voice which then utters the song’s title at the end of a sentence such as ,,Come on and do (The Bump)” and ,,Oh I really love your (Fancy Pants)”.  Silly and simple it may have been, but clearly catchy and effective as well.

And yet another single in the same vein followed in the summer of ’75.  The fact that “Baby I Love You O.K.” failed to crack the U.K. Top 10, reaching a meager no. 12, though, may have been a sign that the formula was wearing somewhat thin.

﻿
Kenny nonetheless soldiered on and played a lot of live dates around this time, either supporting or co-headlining with such contemporaries as Hello, Smokie, Marmalade, and the Bay City Rollers.

Their next single “Julie Anne”, issued in late summer ’75, faired slightly better than its predecessor and peaked at no. 10 in the charts as well as ending up as their one and only Top 5 Australian hit.

Time, however, was running out for Kenny and “Julie Anne” was their last charting single at home.  Their next single release, “Nice to Have You Home”, didn’t even bother the charts there although it did become a minor hit for the New Seekers in the summer of 1976 (#44).

“The Sound of Super K”, Kenny’s first album issued in January 1976, was, needless to add then, nearly dead in the water appearing in the British album charts for a lone week at a lowly no. 56 during the month of the year when record sales are traditionally at its lowest ebb.

Aside from the five single A-sides, the album did contain the original version of the Martin/Coulter composition “Forever and Ever” – later in the year a no. 1 hit for Slik.

A parting of ways with Martin & Coulter was inevitable.  M/C, however, continued their hit-making streak for a little while longer with the aforementioned Slik, for which they also produced an excellent L.P. – a feat they repeated with the Arrows as well.

Kenny, meanwhile, left RAK Records in early 1976 and signed with Polydor instead.
Their first release for their new masters was the single “Hot Lips” in April ’76.  The single failed to chart in the although it hit the no. 20 spot in , where the band’s fan base was obviously still considerable.

﻿
“Hot Lips” is a song in similar vein to the early M/C hits like “The Bump” and “Fancy Pants”, although the production is notably “thinner” and less effective.

Another single, “Red Headed Lady”, followed quickly thereafter, in the fall of ’76, and sounded somewhat softer and more pop-oriented.  Again, some German success was guaranteed although the pickings were still relatively slim at home.
And Kenny’s second L.P., “Ricochet”, wasn’t even deemed worthy of a release before Christmas 1976.  and were the only countries Polydor saw fit to unleash the album upon.

For the most part the new material was self-penned and, unfortunately, rather unremarkable forgettable MOR pop.  Aside from the singles, both of which were written by people outside the band, and a passable version of the old Jackie Wilson hit “Higher and Higher”, “Ricochet” is a rather weak record. 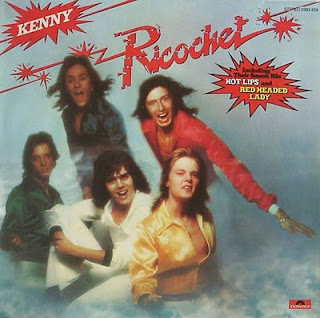 Yet another mediocre Polydor single, “Old Songs Never Die”, was issued in early ’77, but the writing was already on the wall for Kenny.  As if the emergence of Punk wasn’t enough, then guitarist Yan Style injuring his hand in a motorcycle accident didn’t help matters much either.

Lead singer Rick Driscoll and keyboard player Chris Lacklison had both left the group by mid ’77, being replaced with Dave Bowkers and Ian Culey, respectively. 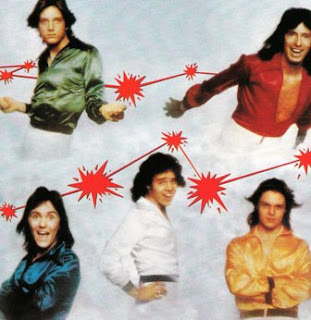 A final single, a disco-fied cover of the Four Tops’ “Reach Out (I’ll be There)”, was released on the German arm of the Decca label in 1979.  Shortly thereafter, Kenny called it quits.

Now, Rick Driscoll seems to have been the most musically active former member of Kenny since their break-up.  He joined Steve Harley’s Cockney Rebel in the late ‘70s, then wrote songs for and with ‘80s hit acts like Classix Nouveaux and Alison Moyet – for whom he also worked briefly as a musical director.  Since then he has mainly focused his attention on writing jingles for TV and radio adverts.  He’s an avid sailor and yoga-enthusiast (!!) as well.  However, in 2009 he formed Rick Driscoll’s Kenny, which every now and then can be found bumping around the oldies circuit in and , mainly.

As of 1996, Chris Redburn and Yan Style ran a trucking business catering to, among others, Rock acts.  And Andy Walton worked in the travel industry while Chris Lacklison ran a pleasure boat business in . 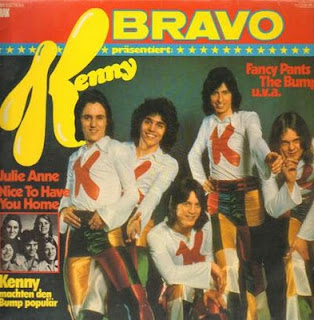 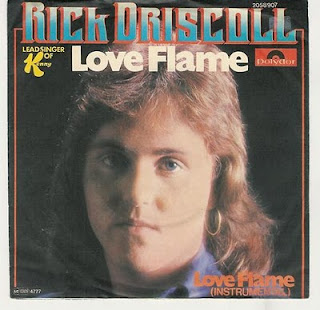 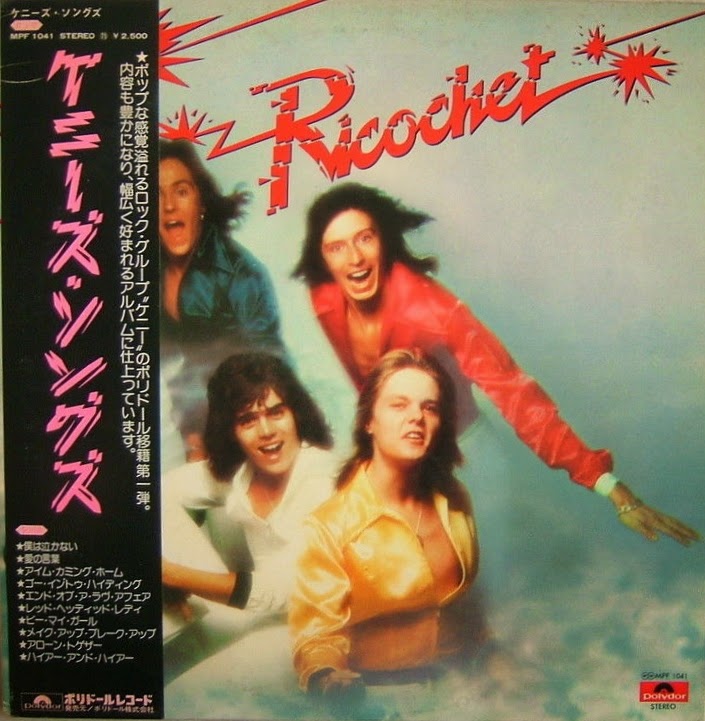 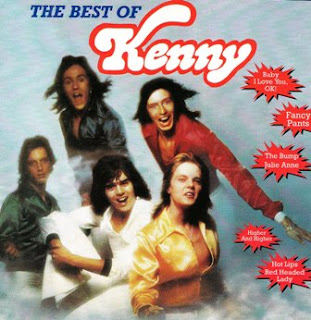